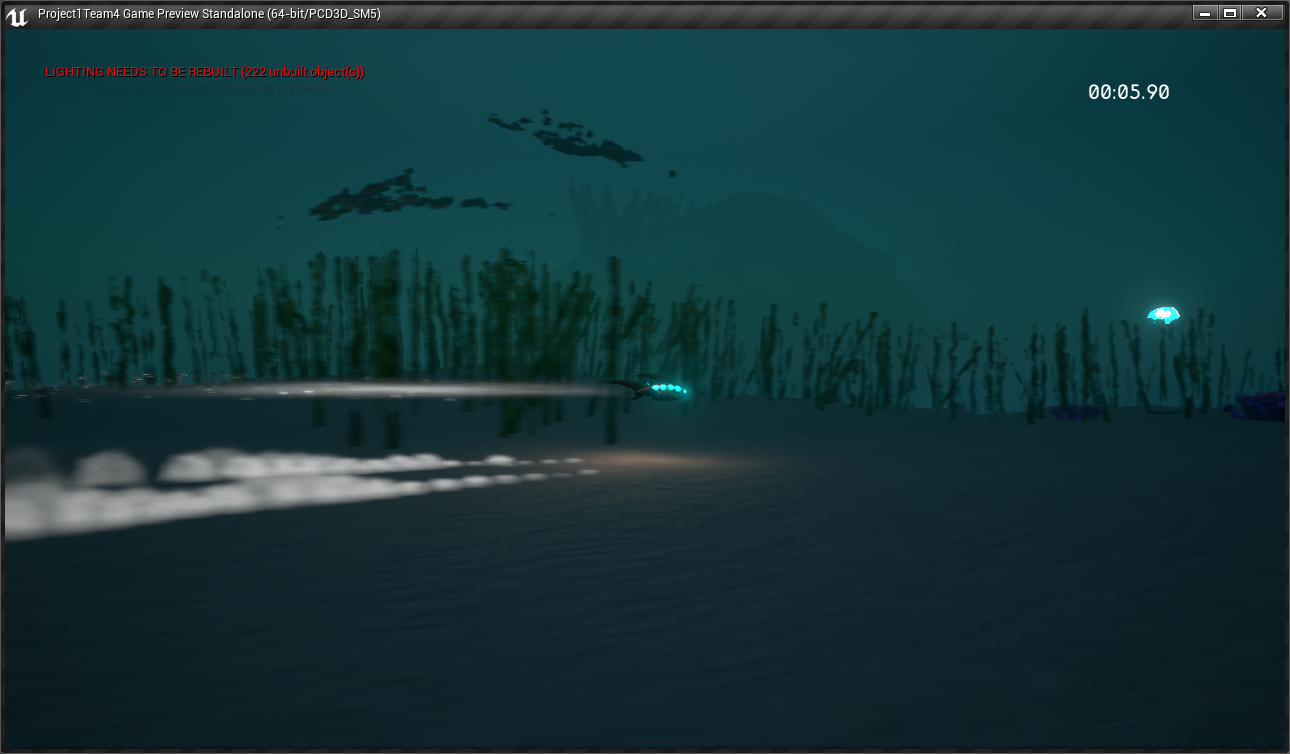 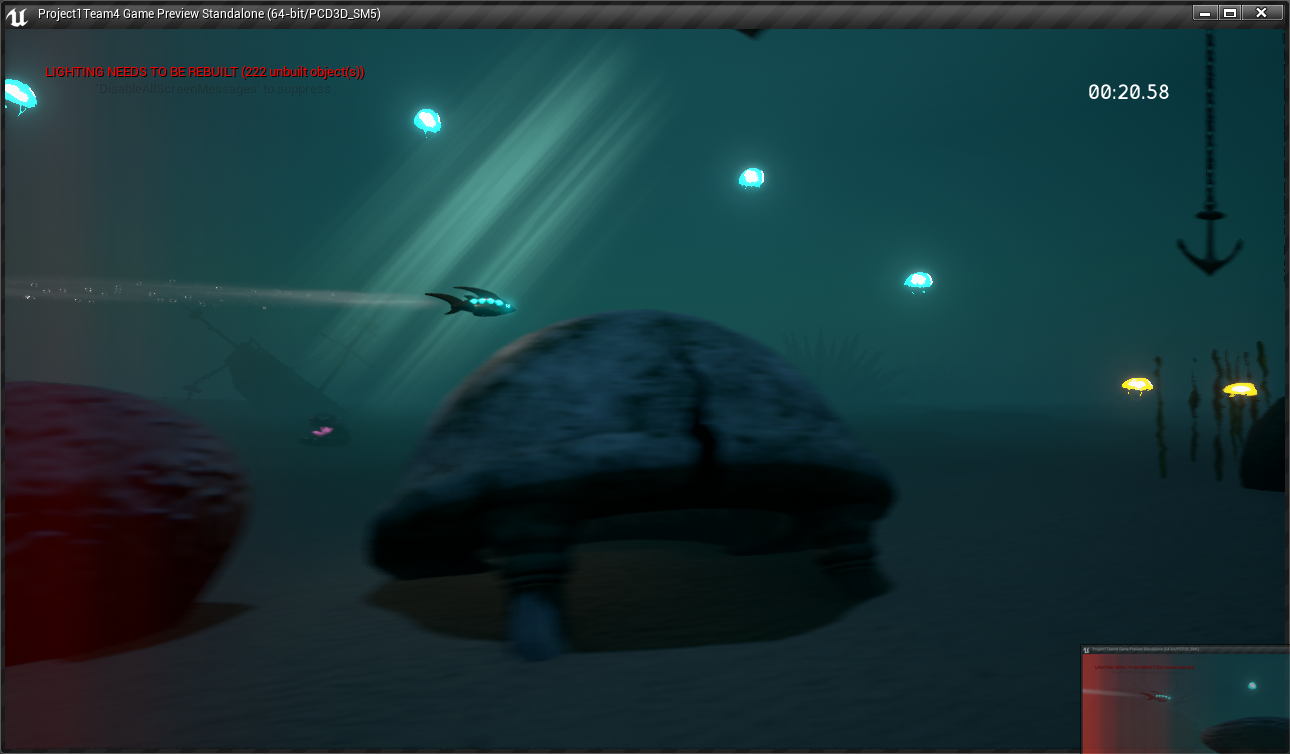 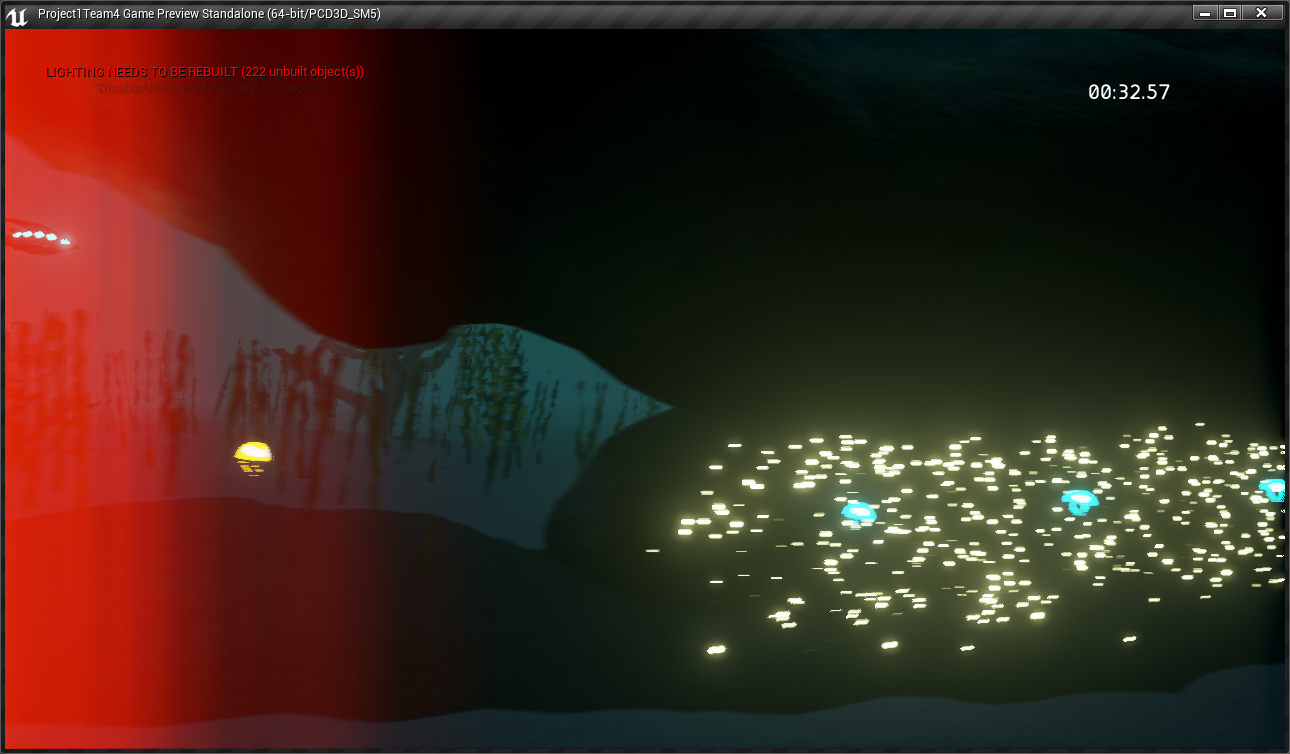 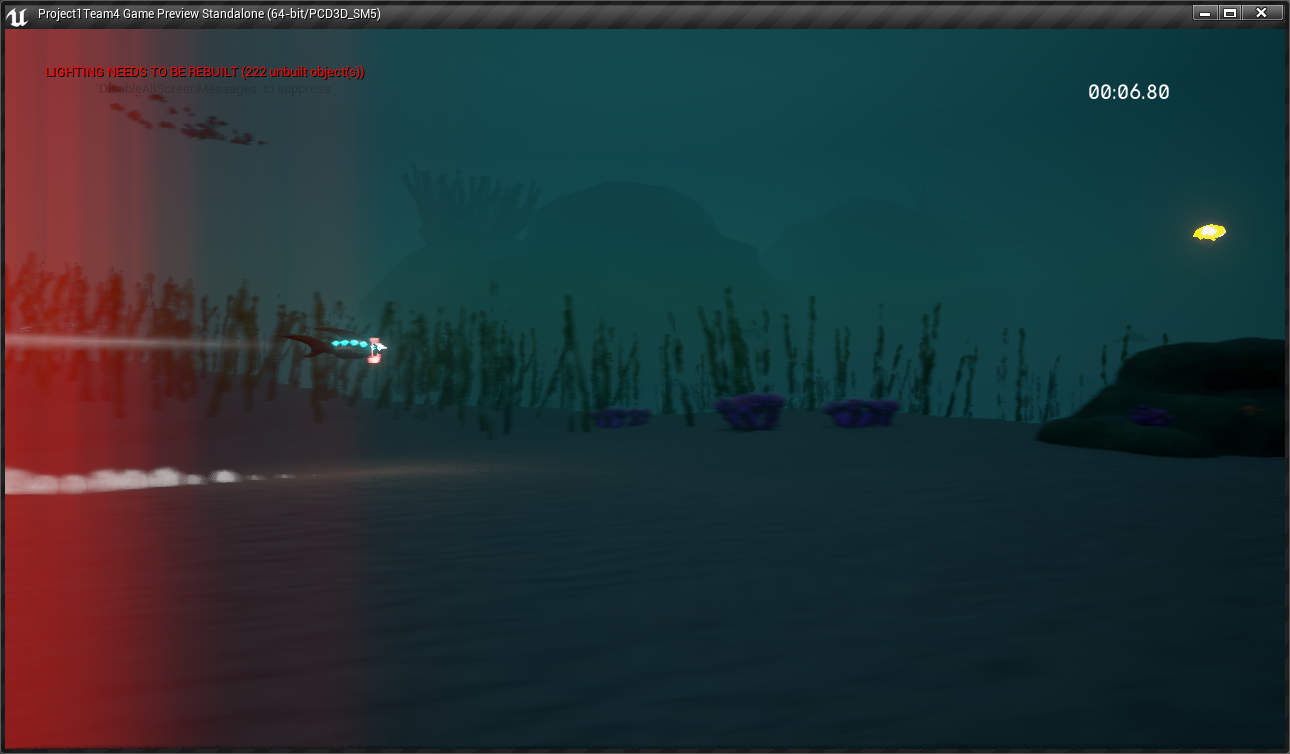 Turbo trout was the first gameproject I made at Futuregames. It is a 2.5D sidescrolling racer, where the players controls a robotic fish with the goal of reaching the end of a level as fast as possible.

Turbo Trout at it’s core is a fairly difficult game, but with a gameplay loop that adapts the difficulty a bit to player skill. The goal is to reach the level exit as fast as possible, and picking up powerups of different colours help the fish go faster. The players can change the colour of the fish, and this colour has to match with the colour of the pickup. Taking the wrong colour results in the fish losing speed instead. This level design is about creating difficulty partially in the physical obstacles that can stop the player, but also about placing the power-ups in a way that keeps players on their toes.

The game starts with the level loaded, and players are only prompted to press start to play. The same screen also shows the current leaderboards. As soon as you hit start, the game’s timer starts and you begin to race(as the game automatically moves you forward). The intro section is a calm section designed to allow players to get used to the controls.

The section starts empty, allowing the players to move freely around the play area. As you move forward, small tutorial tooltips show up on the middle of the screen, explaining controls and basic gameplay concepts. After being told about the speed boosts and how to switch colour, the player is presented with the first ones, which are in one color. The second batch of boosts that come are in a different colour, to remind the player about switching the colour of the fish to match the power-ups. The next waves of power-ups are presented in varying colours, to show players that they will have to carefully and sometimes quickly change the colour of the fish in order to collect as many speed boosts as possible. A final wave position them in a way that it would be impossible for players to catch both, they simply have to choose a path.

At this point, physical objects are introduced. As the players are constantly forced forward, hitting a physical object will push you back a bit, and if your fish reaches the back of the screen, you will have to restart from a checkpoint, which means you lose time. These objects are introduced in a similar manner to the boosts, with scaling difficulty. They’re also used to reinforce split paths in the beginning. Eventually, the players will be dodging rocks, anchors, and other sea stuff while chasing speed boosts and are well on their way to get a good high-score!

The starting area ends with a long calm stretch without obstacles, and after crossing a ravine, hints of the next section show up. Loose mines are floating around, and as one briefly blocks the player’s view (placed between fish and camera), a huge minefield starts to be visible in the background. Of course, this section introduces mines, which push players back more than just bumping into a physical obstacle (and makes a nice explosion!). First in the non-dangerous situation previously described, and then in an easy manner, with just a few mines in the players’ path. Eventually, players will find themselves dodging mines as they navigate on towards the finish.

After clearing the minefield and getting another short break (along with an easy chance to seriously boost your speed), the level’s final part is shown. It is slightly foreshadowed by an ancient-style temple before players’ are ushered into the cave opening.  The cave starts off difficult, with some sharp twists and turns, and alternating blue and yellow speed boosts, requiring a lot of skill from the players. A brief pause follows as the players pass by a vista with themes of ancient architecture. Past this, players’ skill are again put to the test as the following area, an underwater volcano, lacks in visibility. This area also introduces the final obstacle for the player, a gate that can only be broken through if the player ahs high enough speed. It is used to force players down different paths. This area is however quite short, and players will soon after reach the finish line.

In this project, I got great opportunities to learn about level design and designing in a way that helps the players. I made it my goal to design the level looking through the lens of UX, and trying to make sure that players would understand what were coming next. Of course, it was also a great experience in learning to work together in smaller teams.